London will always mean Harry Potter for me. It’s one of the reasons why I wanted to visit. I’ve always been a huge Potter fan. I cried while reading that Dumbledore died. I have the complete set of the books in hardbound and read it countless times. And I always watched the films on the first day or the first week it came out. Yes, I’m a big Potter geek! 🙂

So visiting London was really exciting for me! Arriving from the train in St. Pancras station was already a big thrill as their train station felt and looked like a scene from Harry Potter already, and especially being near King’s Cross station. I was set on seeing as much Harry Potter scenes and places in London as I could. So the day after we arrived, we went to King’s Cross station. It remains to be one of my most favorite train stations ever! I love the architecture!

My panoramic shot of King’s Cross

The ceiling is very nice and artistic and has a grand welcoming effect. It goes on and on in a long swirl. Plus, it’s got nice shops around it too. But before we went around the shops, we of course hunted down where Platform 9 3/4 was. For those unfamiliar with Harry Potter, this invisible platform in King’s Cross is a famous platform from the book that is exclusively for wizards use only to get to Hogwarts. When we found it, we saw a line of people trying it out and posing by the platform. It was mostly kids and of course the kid in me had to have a photo too! Even Ken tried it out. He has always been supportive about my being a fan and I’ll forever be grateful to him for indulging this side of me in our travels connected to Harry Potter.

Me as Cho Chang :p 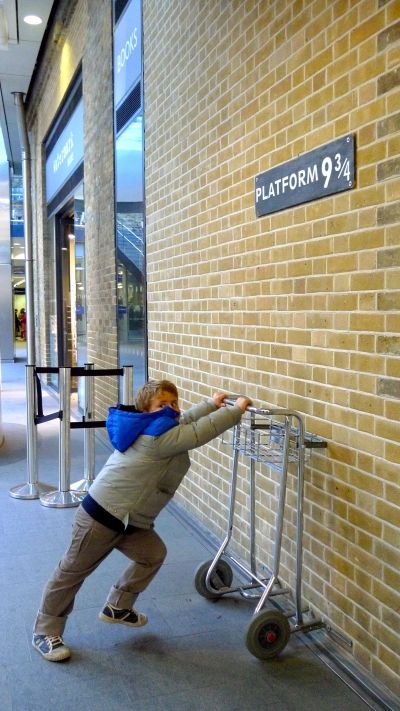 This kid is so cute!

Souvenirs and unique memorabilia were also sold around shops in King’s Cross.

All kinds of Harry Potter books being sold.

That part of Picadilly Circus from the scene below in the movie!

From the scene in the Deathly Hallows movie where Harry, Ron & Hermione escape.

And of course, one day was set aside for our tour in the Harry Potter Warner Bros. Studios, the place where they actually shot most of the film and made everything! 🙂 Bought the tickets months before our honeymoon along with our London Pass and it saved us a bit of quid and time too. It was pretty cool as going there you’ll ride a big bus designed with the theme and the movie plays inside to entertain you during the one hour ride outside of London.

Starting the day early and my HP outfit seems to match our little hotel :p

Breakfast at Pret again of course!

The bus stop for all HP museum visitors.

Got my own wizarding passport! :p

Where all the wizarding magic in the movie was created to bring the book to life!

Entering the studio is like a fully wrapped surprise about to unfold. You keep unwrapping but there are lots of layers and boxes inside and your excitement builds up more and more in each layer. The studio is massive and there are a lot of things to see and check out even prior to the start of the tour like Honeydukes, souvenir shops and some parts of the story like Harry’s cupboard bedroom under the stairs. It’s a sneak peek to excite and keep you entertained as you wait for your turn in the main tour. Then you get to a big big door and the tour guide stops everyone and asks if anyone is celebrating their birthday on that day. And whoever is, gets to open the door. And when the great door opens you realize you’re in Hogwarts Great Hall! Just like Harry who arrived in Hogwarts for the very first time during his birthday! 🙂

Photos of the cast and props from the movie adorn the ceiling of the studio.

Get your magic candies and every flavored beans at Honeydukes!

I want his shirt lol.

Where Harry lived all his life until he got his letter from Hogwarts. 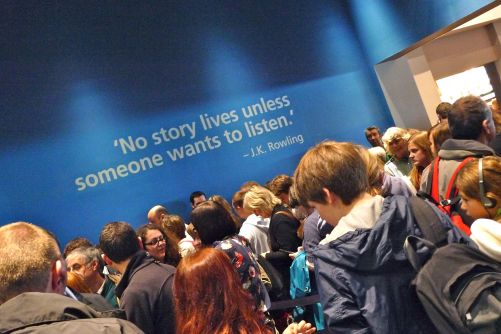 The crowd lining up for the start of the tour. 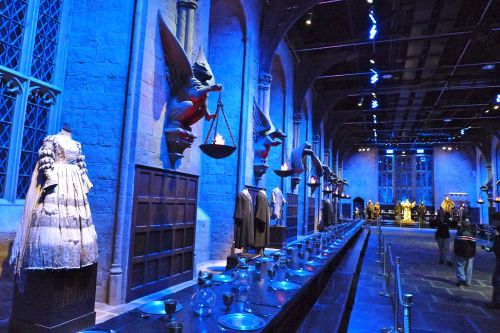 Hogwarts Great Hall welcomes you to the start of the tour! 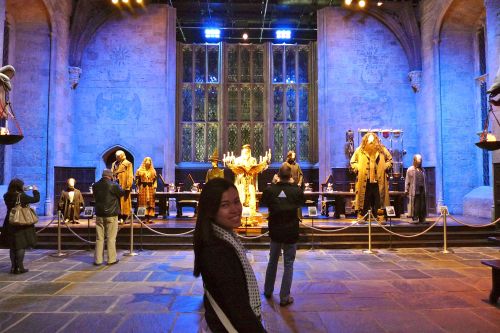 Prof. McGonagall, Dumbledore and Snape behind me.

Mirror of Erised which shows you what you truly desire. Oh it works! 😉 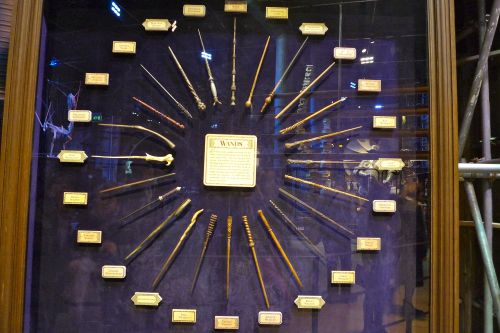 The famous office of Dumbledore!

Where the most significant and secretive chats of Dumbledore and Harry happen.

One of my fave parts! You can choose your House robe and ride a broomstick and you see yourself flying around London! 🙂 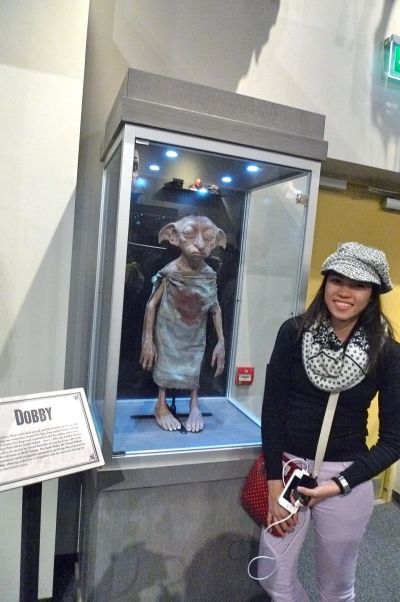 Each section covers parts of the film and shows you the whole creation process for the big screen. And for fans like me, it’s just so thrilling to see everything in real, especially since most of the aspects are just left to your imagination reading the book. So when Warner Bros decided to bring it to life in the big screen, they had to create everything exactly according to the book and in the most visual way possible to give justice to how JK Rowling, and the fans and readers envisioned it. And this studio shared this process and the full experience to the public — where they shot it, the sets they created, all the props, the costumes, the effects and a lot more. It was amazing to see such talent, creativity and hard work that went through creating these series of blockbuster films — films that many new generations of kids (and kiddults like me) would watch and grow up to.

The best bank to keep your gold, protected by goblins. 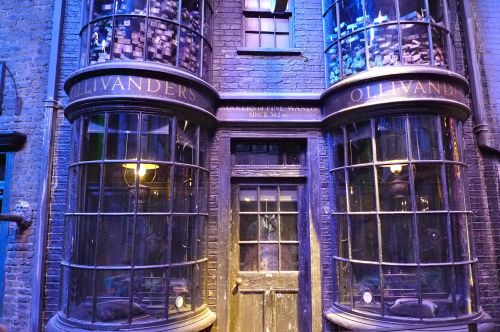 Get your wands here at Ollivanders where your wand will choose you. 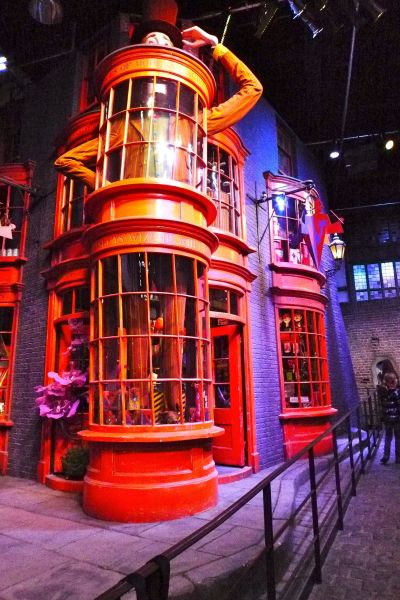 One of the parts we liked in the museum is seeing the design and graphics work and how every little item was made and the art that goes with it. Every material is seamlessly just so in tuned to the time and world that is Harry Potter and helps establish the story even more. Everything was just so creatively done and inspiring that we took photos to share it to the Antidote team. In fact, we were in the process of building Early Bird Breakfast Club during this time in 2012 when we visited and we took inspiration in some items. We’ve always wanted to create a newspaper menu for Early Bird and when we saw the Daily Prophet, we decided to finally do it and have a similar vintage typography newspaper size and feel but in Early Bird Breakfast Club’s own fun, quirky and sunny personality.

“This was a graphic designer’s dream: an extraordinary opportunity to be Creative.” 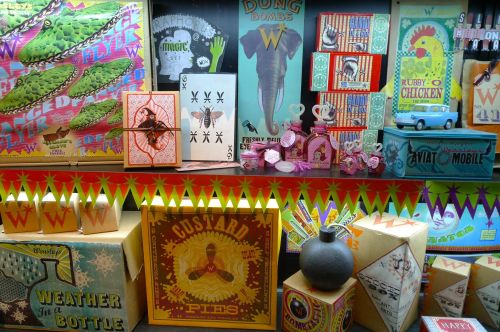 All the magical potions and tricks are intensively designed. 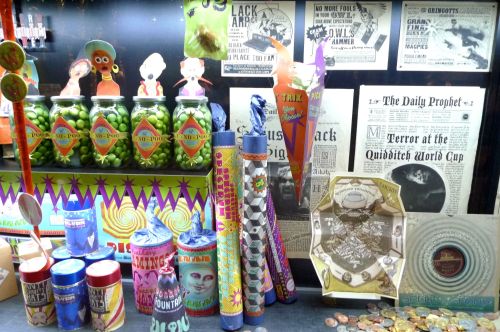 More candies and their vintage newspaper, The Daily Prophet.

We love the vintage typography look of the Daily Prophet that it became our inspiration for our menu, the Early Bird Daily 🙂

Another favorite part of mine in this experience was getting to try the Butterbeer! 🙂 After seeing the sets inside, they’ll lead you outside for a quick break where they offer Butterbeer and you’ll also get to see the Knight Bus, #4 Privet Drive (Harry Potter’s home in the Muggle world), the Hogwarts bridge and the Potter’s Cottage in Godric’s Hollow.

I match the Knight Bus lol! 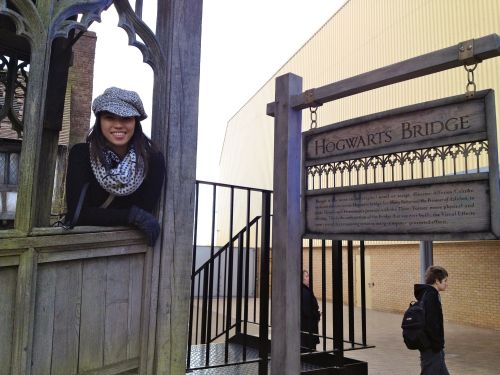 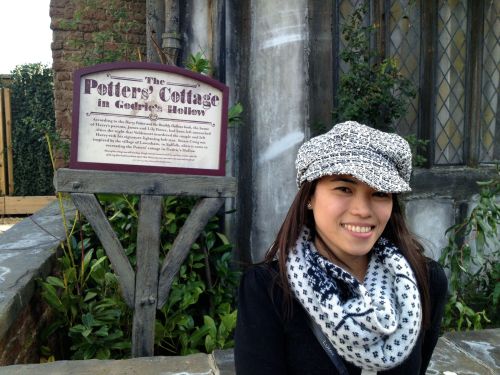 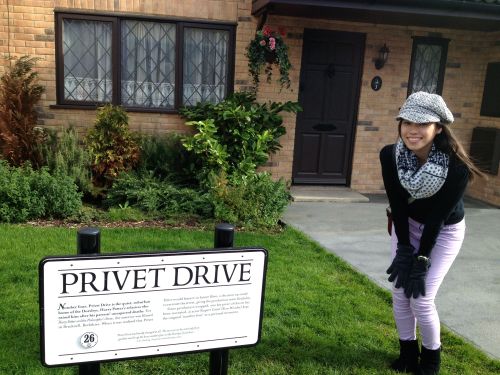 The Dursley’s home where Harry lived 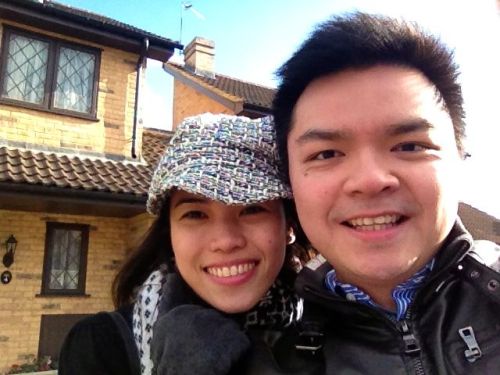 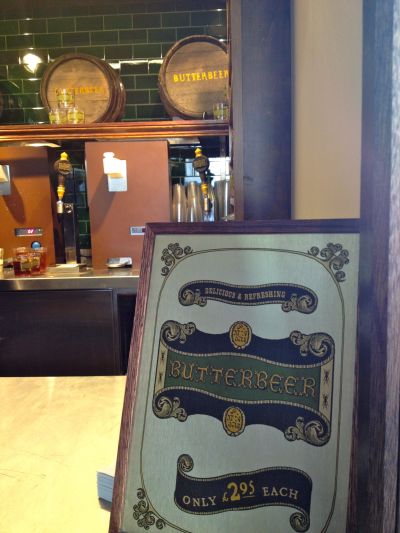 Though the Butterbeer is the only beer I’ll drink, my first taste of it here in London was just okay. The one in Orlando is the one I liked better but that’s another story I can’t wait to share! This one tastes closer to a real beer than the buttery taste I’ve imagined from the book. Adults will like this better than kids. That’s why when we made our version in Early Bird Breakfast Club after this trip, I made sure to improve it into how I want to have it and how I think more people will want it based on the book. So we made ours looking like beer but it’s a tad sweeter since we use cream soda and topped with whipped cream and marshmallows. Our London trip was in October and the moment we got back, I was dying to share my Butterbeer experience to the fellow fans here in Manila. I knew it would be a big hit and that there are still a lot of Potterheads who are dying to experience it but can’t actually fly to London easily. And I was right, the moment we launched it in November 2012 it has been selling like crazy. We were the first to offer Butterbeer in the country and it created a big buzz that it was just supposedly gonna be a Christmas drink but fans have requested for it to be a staple and so it became an Early Bird Breakfast Club signature drink already. 🙂

Towards the end of the tour, they showed how the Hogwarts castle was made. This room showed all the drawings and sketches of Hogwarts and everything else. 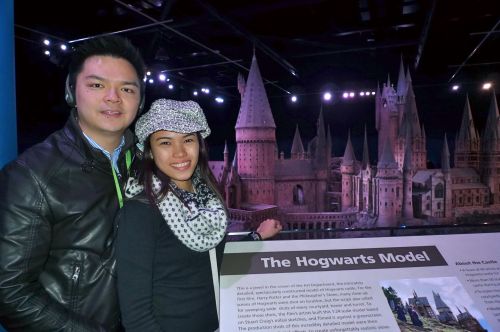 The tour ended at Olivanders wand shop where there are walls and walls of wands bearing the names of the 4000 amazingly creative people who worked on the Harry Potter motion pictures. It was just so cool how they honored everybody who passionately worked on the project for over 10 years. 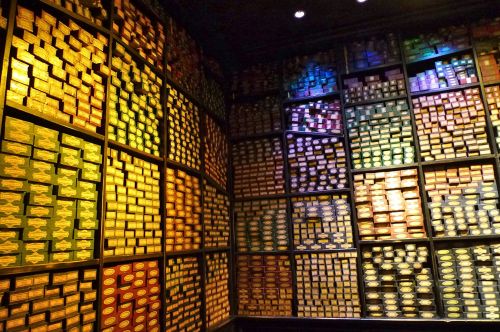 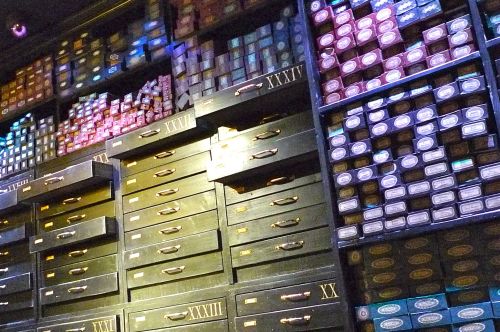 Overall, this experience was amazing. I appreciated it not just as a huge Harry Potter fan but as a person who values imagination, creativity and passion. This Warner Bros studio is definitely a showcase of the brilliant work of JK Rowling and everybody else who worked on the films. Ken isn’t exactly a fan, he hasn’t read the books at all though he watched the movies with me as he would surprise me with tickets on the first day or first week. And yet he also appreciated and enjoyed this tour very much being a creative person too. His company, Antidote, is into branding and design and he likes being exposed to the creative process of other people no matter what field or genre.

It is truly inspiring to know that you can create something so big and impactful out of pure imagination and at a time you least expect it. I remember a CNN documentary we watched before that featured JK Rowling’s story. She was going through a difficult time in her life and was almost at rock bottom during the time she was writing Harry Potter. She just kept at it and believed in it. And lo and behold, her life changed the moment she published it. And look at her now, probably rolling in dough (lol!) over the countless different publications of the books, the Warner Bros films, Universal Studios Hogsmeade and Diagon Alley theme parks in Florida and Japan, and possibly remakes of the movies in a couple of years. All these out of a single gem of an idea. Truly amazing! Some people think Harry Potter is just for kids and that I probably just wasn’t able to outgrow it haha. But for me, I like going back to it during our travels as it’s really one of my favorite books. And I think that sometimes as grown-ups, there are time that we need to be reminded that pure imagination, creativity, passion and drive are just what we need to achieve big things in life or simply our life’s dreams 🙂 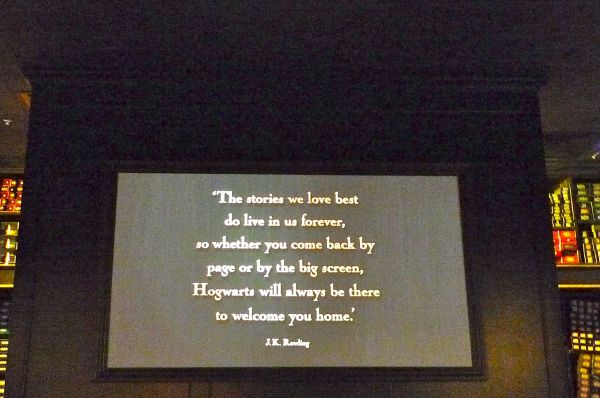